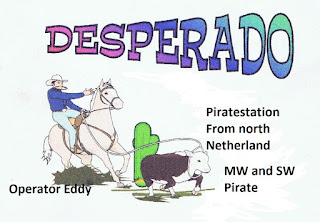 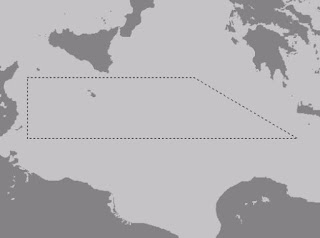 WFED broadcasts with 50,000 watts from our transmitter site in The site has been in continuous use since 1939.
David Kolesar, Senior Broadcast Engineer.

Thank you for your QSL!
Posted by jaarranzs at 22:23 No hay comentarios:
Labels: MW, qsl 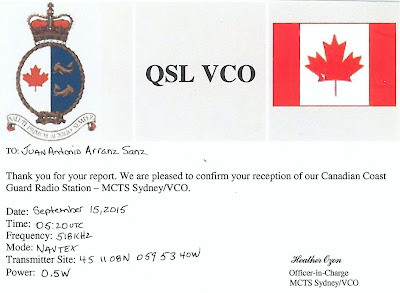 We have the following scheduled NAVTEX broadcast times:

Our broadcasts consist of ice (winter only), weather, Notices to shipping and Notices to Fishermen information for mariners. We transmit with 1 kw during daylight hours and drop that to between 0.450-0.500 kw during the evening, from our transmitter site located at 45 11'08"N 59 53'40"W (Port Caledonia, Nova Scotia). We are required to provide a minimum 300nm (nautical miles) coverage area. But, as you've personally experienced, our coverage extends far beyond this, with the proper conditions.
Other broadcast services we provide are seasonal ice charts via radio facsimile (4416 kHz and 6915 kHz). As part of GMDSS, we are also equipped with a VHF-DSC system and continuously monitor VHF channel 70.
Up until June 1999, we provided services in Morse code on 500 kHz. It was a great sadness to us all when that service was discontinued. Even though other forms of communications have replaced it, Morse code proved over time to be one of the most effective means we had to stay in touch with ships at sea.
We also provide a Vessel Traffic Service (VTS) function in 2 distinct areas:
• Chedabucto Bay and the approaches to the Straits of Canso (body of water which separates Cape Breton Island and the rest of the province of Nova Scotia)

This is done with the assistance of one radar installation at 45 30'53"N 61 15'15"W (Eddy Point, Nova Scotia). We began handling these duties in late 2000, early 2001.
Our Coast Station is staffed by 11 operators and one Officer-in-Charge. We have quite a large coverage area, encompassing the waters around Cape Breton Island, the province of Prince Edward Island and the waters off the province of New Brunswick, north to the province of Quebec's border. This is achieved via 10 communication sites controlled from Sydney. Most of our radio work is performed in the VHF maritime bands even though we still monitor the MF international distress and calling frequency of 2182 kHz, broadcast on 2749 khz, utilize 2582 khz and 2530 khz for ship-store communicatios, and also have a dedicated frequency to communicate with Canadian Coast Guard vessels.

Thank you Bob and Best DX!
Posted by jaarranzs at 22:49 No hay comentarios:
Labels: MW, qsl

Thank you Colleen!
Posted by jaarranzs at 22:38 No hay comentarios:
Labels: MW, qsl